The Baptist Evangelical mega-church in southern Orange County is the largest in California and one of the biggest in the US with several campuses in California and worldwide, complete with a busy worship schedule inspired by senior pastor and best-selling author Rick Warren.

For now, the 24 new FORTE luminaires – the Church’s first Robe investment, specified by lighting manager Jacob Olson and supplied via integrator Amplio Systems – are rigged on trusses above an impressive temporary tented structure, custom-designed and erected during reconstruction of their church’s main auditorium.

The structure was erected when the California Covid tier system enabled the Church to start holding limited capacity worship sessions once again, providing a safe temporary venue for socially distanced events during the pandemic.

Jake had recently graduated from University of Alabama where he studied Production Design & Technology when he joined the technical team at Saddleback Church, which is led by technical director Dennis Choy and John Cassetto who oversees all the worship sessions.

One of Jake’s initial tasks was to start looking for appropriate fixtures for the new worship center. The large auditorium will have its previous 3500 capacity increased once finished, so this already needed bright high-impact luminaires.

“Fast, fluid and flexible” was a mantra driving the choice of all the production elements – lighting, sound and video – explained Jake, and for lighting in the 130 x 130-ft temporary amphitheater, they additionally needed fixtures powerful enough to make their multi-camera broadcasts look great in daylight as well as in dark conditions!

The structure is built on one of the many lawn areas and covered by a series of scrim-like roof skins allowing 20% light transmission.

Quality live broadcast has been at the heart of the Saddleback Church’s worship delivery for some time, and it is beamed to over 20 campuses around the globe. Since the pandemic, streaming has been an absolutely critical communication conduit to reach out to their various communities during these tough, challenging, and uncertain times.

The FORTE had just been launched when the Saddleback Church’s quest for new lighting fixtures started in January, and Jake was immediately interested.

“I love the Robe BMFL,” declared Jake who has utilized them on many stadium and arena shows, with the FORTE effectively an LED equivalent of that signature light. “It ticks all the functionality boxes as well as being sustainable and cost-efficient to run.”

He adds with great enthusiasm that it has been super exciting to be among the first adopters of Robe’s latest technologies!

Robe’s proprietary state-of-the-art TRANSFERABLE ENGINE (TETM) technology with its unique transferable LED light source is the essence of the fixture, and with broadcasting in mind, features like high CRI was relevant to the decision. “Color is everything,” commented Jake. “A high-powered LED fixture that is flicker-free, can give great skin tones and also be used for multiple effects was a complete win-win for us!”

The zoom was another plus point as he likes to be able to zoom the FORTEs out from above the stage to cover the whole audience area.

Jake lights most of the worship sessions himself using a grandMA3 system, and assorted other lights including LED battens, LED strobe / floods and moving wash lights, but the FORTEs are right at the core of the rig and they replace some previous older moving lights from another manufacturer.

Having initially received a demo from Robe North America’s US western regional sales manager Adam Camp, Jake appreciated the fixture as well as the service and attention to detail shown by the Robe North America team, describing them as “troopers” in terms of taking on the challenge of delivering at relatively short notice once the decision was made.

For now, the outdoor auditorium looks set to stay in its current green and very pleasant environment as covid-safe worship sessions continue to be staged beneath it, and the plan is to move the lighting kit indoors when the fully upgraded and expanded auditorium is completed and able to open once again. 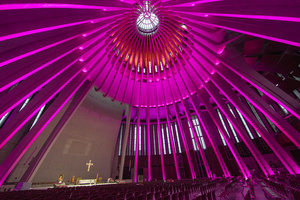 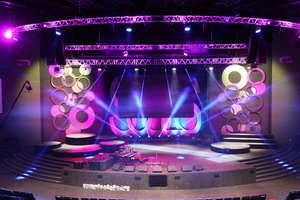 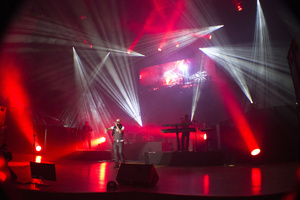