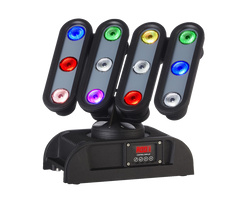 Regular La Demence parties are staged throughout the year including three large weekenders that currently include a ‘main night’ in the 11,000 capacity Palais 12 at Brussels Expo centre. This challenges Thomas to produce an epic look and ambience as a perfect backdrop to 12 hours of banging techno and non-stop raving! The most recent one coincided with Pride Weekend and Thomas populated his lighting rig with around 200 Robe moving lights!

The galvanising factor is to create a constantly changing, fresh and invigorating environment for 12 hours of hi-energy DJ performance punctuated with body-and-eye popping dance numbers involving acrobats, trapeze, silk and aerial artists which is why he spec’d lighting fixtures with the greatest flexibility.

Also instrumental in creating the visual aesthetic is regular La Demence lighting console operator, Fredrik Heerinckx who brings his own flair and personality to the show.

Thomas hit on the idea of using a giant road-construction red warning triangle filled with a 10 mm LED surface as the centrepiece, inspired by the event’s theme of ‘Hard Workers’. Stage lifts were incorporated into the floor for various dancer entrance / exit points.

This was flanked by LED columns along the back of the stage. Most of La Demence’s video content is created by Jeremy from award winning video artists “AlexEtJeremy”, however it is controlled via Thomas’s team and output via two 4k media servers connected to the grandMA lighting console.

Eight lighting pods were hung at different heights above the stage, each rigged with six Pointes and six LEDBeam 100s, allowing the beam-work from these fixtures to bounce all over the stage and right to the back of the audience.

Forty-eight CityFlex48s, a distinctive legacy fixture from Robe which has four sections that can be configured into different shapes or run as a linear strip, which was the case, here were positioned around the triangle in an outline style. “They are versatile, great fun, very creative and ideal as both an LED strip and a blinder unit,” he confirmed, using them extensively for strobing and bathing the stage in a universal colour wash.

Frederik is really creative with the CitiFlex’s. One moment he uses them as humungous strobes then flips to controlling each pixel individually or as a giant coloured blinder – either way, it’s pure eye-candy delight!

The 18 x Spiiders were on the over-stage trusses and provided a general stage wash, supported by eight Robe 600S Spots also used as top lights for one of the dance acts which involved artists performing on hoists flying up and down. “It was the only way to light them precisely, interestingly and a bit idiosyncratically”:

To complete the picture, the stage received a warm theatrical glow from the 14 x LEDWash 600s utilised as side lights.

Thomas has always been a big fan of the LEDBeam 100, “You can have loads on a show, pull virtually no power and keep the crew very happy as they are so small and light”. He is also impressed with the new LEDBeam 150 which he loves for the small size, brightness, and speed plus the zoom is a “massive bonus”.

“The client is really particular about the atmosphere creation at these events,” exclaimed Thomas, “it’s absolutely critical to hit it just right, and it can make or break the party!”

The BMFLs added greatly to the vibes.

Thomas and Fredrik programmed them into lots of big, intense, dramatic fat-beam looks and effects. They certainly didn’t run out of choices for what to do next with these on the rig. “We love a bit of tension and excitement on these shows especially for the live sections,” he elucidated.

The trusses were all angled slightly to accentuate the three dimensionality of the stage space and above the audience, down the two long sides of Palais 12, were three trussing triangles (six in total) each rigged with LED PARs.

La Demence lighting colour schemes are two colours max. at once to save it becoming a mush and to ensure a subtle mix of precision and pandemonium!

Thomas always keeps some visual surprises back for the final hours to pep people up just when starting to flag!

“Fredrik is an exceptionally skilled operator who is also very technical in his approach. He also used a grandMA fader wing and a set of custom foot pedals which give him an arsenal of tricks up his sleeve …. And for those moments when he needs more than two hands for the console!

L&L Stage Services were the rental company for the latest La Demence. Thomas works with them a lot and enjoys their excellent kit, crew and attention to detail. L&L has invested steadily in Robe in recent years and now have several hundred of the brand’s fixtures in stock, all supplied via Benelux distributor, Controllux.

L&L also supplied audio for this show in Palais 12, with video hardware coming from Pixelscreen.

Thomas was one of the first LDs in Belgium to start utilising Robe products when the brand officially launched in 2002. He is one of the leading Belgian designers working across multiple visual disciplines on a range of funky brand activations, experientials, corporate and industrial presentations, concerts and dance parties for an eclectic selection of clients from BMW and Mercedes to Red Bull and L’Oréal.