Curve Theatre in Leicester, UK, saw a welcome return to live audience performances with a run of “The Music of Andrew Lloyd Webber”, a new production that is part of the venue’s socially distanced season. An eye-catching lighting design was created by Ben Cracknell for this spirit rousing, in-the-round show directed by the theatre’s artistic director Nikolai Foster, featuring a talented cast including Lloyd Webber musical stars and a fabulous live band.

Ben utilised some Robe T1 Profile moving lights for key lighting, which were rigged on two of six trussing pieces on an automation system. These started off almost on the floor looking like part of a pile of abandoned tech kit in a dusty old theatre, shuttered during the lockdowns – part of a stark, minimalist and very effective production design by Colin Richmond.

As the show kicked off and came alive, the cast pulled dust sheets off the piles of ‘discarded equipment’ and the trusses rose – like phoenixes from the ashes – to form a series of spectacular architectural shapes above the stage - dubbed “the spider rig” by Curve’s head of lighting and technical Jonny Laidlow.

The T1 Profiles were rigged at the most upstage and downstage points of these trussing spokes, in positions that maximised coverage across the stage area, where they provided lighting specifically for the faces.

Ben commented, "The T1 worked well as part of the rig primarily for key lighting. The limited rehearsal time to light this production meant that I was reliant on moving lights to pick performers out quickly and efficiently. The colour mixing allowed me to get skin tones and it packed a great punch for such a compact fixture.”

Curve has two separate venues with a central dividing wall that can be removed, and this is how it was configured to present this show. Seating was added to the back of one stage and along the side wings of the second venue to make it one large in-the-round space, with enough seating for a 550 one-metre-plus socially distanced audience.

It was the first time a show has been set up like this and proved a big success.

Audiences were treated to a collage of famous foot-tapping and stirring Lloyd Webber classics and anthems from blockbusters like “The Phantom of the Opera”, “Starlight Express”, “Cats”, “Joseph and the Amazing Technicolor Dreamcoat” and others brought the auditorium alive with colour and animation.

The T1 Profiles were used to bathe actors in an exceptional quality light which produces fabulous skin tones throughout the performance. “It is a great luminaire that’s been designed from the ground up specifically for theatre,” commented Jonny, who was also impressed by the quietness.

Noise is a big consideration for in-the-round shows where the rig is more exposed than in a standard end-on scenario, with no wings or other objects to help mask ambient sounds.

For Jonny and the Curve team, “The Music of Andrew Lloyd Webber” was a welcome return to ‘almost normal’ and a precursor to the non-socially distanced and full capacity shows which return in the autumn season, running in both 970 and 300-seater auditoriums. 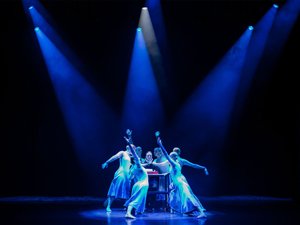 The grace and fluidity of dancer’s movements were enhanced by an equally elegant lightshow designed by Koen De Clerck for “Cogétama” a special choreographed ballet work created and produced by Glen Lambrecht Productions, commissioned by the Municipality of Aalter. It was staged at the City Hall Auditorium of Aalter in Belgium and played 12 completely sold-out performances.

The UK panto season is back with a BIG bang after waiting in the wings during 2020 as the country squared up to Covid-19, reigniting all things panto like slapstick comedy, toilet-brow innuendo, gawdy sets, psychedelic vibrance and total craziness for which it’s known and appreciated, with lighting designers around the country delighted to be back working on this peculiarly English and highly expressive genre of performance. 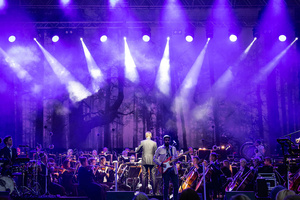