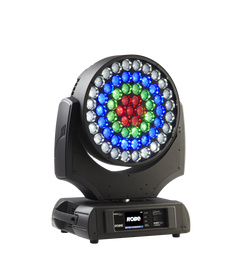 Meelis has taken full advantage of Vanemuine’s house rig which includes a substantial amount of Robe moving lights, weaving 20 x MMX Spots, 10 x 600E Spots, 30 x LEDWash 1200s and 12 x LEDWash 600s into his scheme for the lively and colourful show set on the Greek island of Kalokairi on the eve of Sophie’s wedding to Sky.

Ain assembled the creative team for this show and Andres Sarv, head of lighting at Vanemuine initially suggested that Meelis would be a great choice. He's also worked on previous musicals and other productions with Ain, who understands the crucial importance of technical elements like lighting in any production and to the completion of his vision. He and Ain have a fluid creative dialogue with each understanding what the other needs and wants to achieve in respect of telling the story.

Meelis has actually been working with Robe products since he first discovered the ColorSpot 1200E AT circa 2005, and has always been a big fan of the brand, a loyalty which has remained and grown over the years.

Among the best things about Robe is the reliability he states. “Right from the start their products have been rock solid, which has been further boosted with all the LED technology now being utilised which makes them all the more indestructible!”

He also finds the light weight of the products very useful. It means they can be rigged easily in a variety of places.

So naturally he was delighted to be able to use the Robe fixtures at Vanemuine to light this stage show, written for stage by Catherine Johnson and incorporating 22 foot-tapping universally recognisable ABBA hits.

The lights are all rigged on the Big House’s extensive above-stage house bar system.

The MMX Spots are being used for effects, gobo looks, texturing the set, etc. and for all the big dance numbers when the stage needs to come alive and look very animated. The MMX offers “an excellent range” of effects says Meelis.

The LEDWashes are used for all the basic stage washes. “I love them, they are fantastic for theatre shows, the quality of the wash is smooth and even … and they can produce the full spectrum of warm and cold colours needed for any show”.

Challenges of lighting Mamma Mia included large numbers of people onstage at certain times and ensuring that they were all well-lit, and also lighting the set – designed by Riina Degtjarenko from the Estonian Drama Theatre – appropriately. Reflecting the balmy temperatures of the Greek Islands, the eclectic mix of characters, the different lifestyles and heady emotions of the story was a lot of detail to get across in a short time, so the scenic aspects included many white and pastel surfaces and props.

While reflective and light coloured elements assisted lighting in some ways, Meelis was also under pressure to be very precise and detailed in focussing and choosing his effects and colours. It also made getting the few darker scenes properly dark an interesting task!

With Robe in the house, these goals were all achievable!

He has enjoyed working on the production and with the entire team – creative, production and all the cast, “Everyone is fun and full of positive energy. It’s been a great experience all round”.

For Ain, who’s been a fan of ABBA since childhood when Estonia was part of the Soviet Union and it was extremely difficult to access any ‘western’ music, ensuring the work is coherent, entertaining and superbly produced is an emotional as well as a directorial journey.

“Estonian audiences are extremely critical when it comes to theatre, you can’t fob them off with clichés … it has to be a careful balance of humour and poignancy to get the narrative across”.

He recalls seeing the first Mamma Mia touring production in Tallinn 15 years ago which he didn’t like. Proudly Estonian, he wanted to ensure that as the first Estonian production, this was one of the best and most critically acclaimed Mamma Mia’s worldwide.

“Lighting and set are absolutely crucial to how the production is presented and received by the public. I really love the way lighting technology is advancing and increasing our options all the time … it’s like oxygen,” he says.

Vanemuine is in a unique position of having all the resources and talent in-house to produce big shows of this quality including the technology, technicians and engineers, actors / dancers and musicians.

The production, executive produced by Marika Goldman, will also play the Nordea Concert Hall in Tallinn, and is expected to run for several months, such has been the demand for tickets.