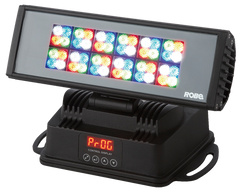 This was staged at the Bassline, downtown Johannesburg’s hottest live music venue, right in the heart of the City’s buzzing Newtown district, with eight top dance crews battling it out for the title, and Robe LEDBeam 100s providing a perfect lightweight lighting effects solution.

Several challenges faced the technical production. One was a very low weight loading in the venue’s roof – and another was delivering the high show production values demanded by one of the world’s leading brands - in a relatively tight space.

AV Unlimited’s technical production manager and lighting designer Victor Vermaak explains that initially the venue would not let them fly any lights off of their roof beams as they don’t have a definitive weight loading.

However, when they felt the miniscule 4.4 Kgs of the Robe LEDBeam 100 – they gave the go-ahead for the fixtures to be installed.

Twenty four LEDBeam 100s – newly purchased by AV Unlimited were rigged directly to the Bassline’s roof pipes, right above the stage and dancefloor in exactly the positions needed to perform for the show.

The high energy event - won by Reptilez - also had to be lit for television broadcast, so the standard lighting rig fixtures were focussed on the stage and performers, while the LEDBeam 100s were used to produce lots of eye and camera candy with bright colours, pulsating chases and fast movements.

Vermaak used 12 Robe CitySkape 48 compact LED floods to illuminate the VIP Area among other lights, and the whole event was a great success.

These ROBIN LEDBeam 100s are the first Robe fixtures to be purchased by AV Unlimited and were delivered by Robe’s South African distributor DWR.

They are very pleased with them.

Another advantage is the low power consumption which is ideal for so many situations, and more fixtures are expected to be in the pipeline!

Vermaak has used them on a Samsung Galaxy III smartphone launch event amongst others. In fact, he likes them so much they are now incorporated by default into 80% of his show designs.