Robe Dances with the Mazowsze Stars

The famous Polish State Folk Group of Song and Dance 'Mazowsze' is named after the Mazowsze region of Poland.

In 2018 it became even better known after featuring in Paweł Pawlikowski’s movie Cold War – and just before that, it invested in some of Robe’s large Tarrantula LED wash beams, which met a tender specification that was initiated by technical manager and lighting designer, Lukas Rúzewilz.

Their impressive rehearsal and performance facility on the outskirts of Warsaw has been open since 2009, and Lukas has worked there for a year, before which he was the technical manager of the Dramatic Theatre in Warsaw, another cultural landmark.

Mazowsze’s 600 capacity venue is funded by the government and, in addition to being home to the company, it stages several other dance, music, theatre, comedy and ballet shows, amounting to around 250 a year. All Mazowsze’s own touring shows are produced there before going on the road.

When Lukas joined the production and technical team a year ago, the venue’s existing moving light rig was 10 years old and in need of an upgrade, so he started the ball rolling on this process.

A tender for new moving lights was offered to selected companies, and the section to provide LED wash lights was won by Robe’s Polish distributor Prolight with the Tarrantulas, which met the spec nicely.

Prolight supplied 24 Tarrantulas as part of the new package, on which Lukas commented: “They have everything you want in a lamp and are extremely powerful and strong.”

He lights all the productions that appear onstage at the venue, and has often worked with Robes on previous shows, including LEDWash 1200s, a popular choice from Robe’s first generation of LED washes.

One of the challenges in lighting Mazowsze’s own shows is in bringing out the beautiful colours and intricacies of the traditional folk costumes, and so when Lukas and the technical team were discussing the idea of new fixtures with the company’s director, Jacek Boniecki, they touched on issues like the reliability and long life of the lights in the context of having  good continuity.

Twelve of the Tarrantulas are installed almost permanently in the venue above the stage and work most of the time, while the other 12 are used as and when needed. They work as a perfect complement to the profile fixtures that were also part of the lighting upgrade.

Mazowsze already has some other Robe fixtures including 7 x MegaPointes, 24 x Cyc FX 8s and 16 x LEDWash 800s. The CycFX 8s are often used to up light backdrops, legs, borders and other ‘soft’ items or drapage, and these are all used frequently for the music shows staged there.

Some of the Robes also go on the road for their tours. Lukas comments that even though they have had them for over a year now, they are still getting comments and interest from local crews when they turn up at regional venues with the Tarrantulas!

“I absolutely love the continuity and the beautiful colours,” he states, adding that it’s made a very positive difference and brought extra flexibility and dynamics to how they can light shows.

The costumes come from regions all over Poland.

A typical Mazowsze performance will include around 80 dancers, 40 x orchestra and 20-24 songs all in different and highly detailed costumes … so that’s A LOT of costumes and quick changes! Add the technical and other crew on top of that and that brings the total up to around 165 per show or tour!

The company Mazowsze was established by a decree issued by the Ministry of Culture and Art in November 1948. This ordered composer and musical arranger Professor Tadeusz Sygietnysji to create a folk group to maintain regional artistic traditions and the traditional folk repertoire of songs and dances from the Masovian countryside. The group was intended to protect this folk tradition and capture the essence of its diversity and richness. Initially, Mazowsze's repertoire contained songs and dances from just a few regions of Poland but has now extended its range by adopting traditions from numerous regions, all of which are incorporated into their spectacular internationally and nationally acclaimed shows. 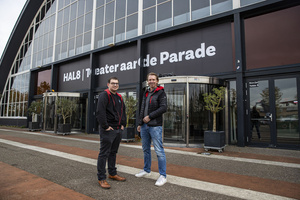