Robe - As cool as Ice 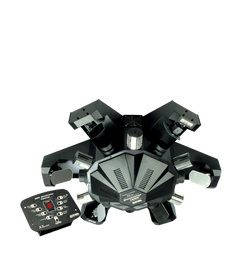 Phill Knight of Knight International had no hesitation is specifying Robe moving lights for a new permanent installation at the Riverside Ice &amp; Leisure venue in Chelmsford Essex.

Phill Knight of Knight International had no hesitation is specifying Robe moving lights for a new permanent installation at the Riverside Ice & Leisure venue in Chelmsford Essex.

“It’s a good brand, well engineered, very reliable, great value for money and they could be delivered on time” he says. The fixtures were supplied via Robe UK.

Riverside Ice & Leisure has recently undergone a complete technical revamp. Knight – who has worked for owners Chelmsford Borough Council for several years, was called in to design and install the new trussing and lighting system.

The venue is in constant use. There’s ice discos four times a week, a large annual pantomime and it’s also the home of the Chelmsford Chieftains ice hockey team and utilised for practice sessions and games as well as being open to the general public.

The brief was to produce a multi-purpose rig, and have enough kit in house to jazz up for the discos, illuminate the panto without needing large amounts of additional lighting and also to provide general lighting for the public and team hockey sessions. They are also going to be using some show lighting to add razzmatazz moments to elements of the games like the entrances and exits.

He chose 12 Robe ColorWash 575 ATs, and eight 575 Scan XTs, plus 4 Dominator 1200 XT centrepieces and 6 ClubRoller 250 CTs. These are spread across a 45 x 16 metre truss suspended over the ice rink. They are controlled by an Avolites Azure 2000 console which has been programmed by Chris ‘Wiz’ Wisbey, who is also one of the regular operators.

Knight has used Robe equipment on numerous previous occasions and was one of the first UK companies to invest in the flagship 1200 range. He says, “There’s a lot more Robe around now, and it’s no coincidence that the brand has earned such a respectable name in such a short space of time.”

Reliability was a key here – not just because the fixtures get heavily used, also because Knight International runs the rig and is responsible for its upkeep and maintenance, so they wanted lights up there guaranteed to be low maintenance.

He knew Robes would be resilient in the harsh working environment, which features high humidity as well as extreme cold .

Functionality was also important – the fixtures needed to offer a wide range of effects to utilise for all the different types of shows – from theatrical to sporting – and this is where Robe also scored. Knight likes the brightness of the 575s and thinks they make a great general purpose stage light.

The Dominator he says, offers great "Bang for buck". With a 6-fold multi-scanner at the core of the fixture, 6 arms, moving mirrors and barrel mirrors, fabulous retro disco looks can easily be created – which go down a storm with audiences and performers. The rotation-speed of the barrel mirrors is fully controllable, and there’s also a 3-facet prism-effect, 6 gobos and 3 different dichroic color filters.

Having the ice as a stage and also a large projection surface means the stunning gobo effects offered by all fixtures can be maximised. The myriad of possible beam effects are also enhanced by the presence of truss mounted fog machines, and these effects are also proving popular, adding a new dimension and layer of excitement for those using the ice.

The installation was completed in a tight 5-day time slot during which the venue was closed.

Artists continue to be creative and inventive in presenting themselves during these pandemic times, and legendary musician, singer and songwriter Todd Rundgren’s ground-breaking new virtual ‘tour’ concept took imagination, technology and lateral thinking to another level to bring fans the most exhilarating experience possible! 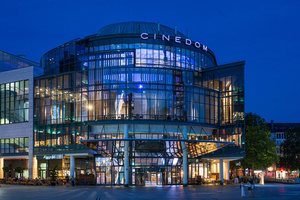