The visual and performing arts faculty covers multiple genres – theatre, drama, opera, dance, ballet, jazz, etc., offering undergraduate and master’s degrees, and has 9 busy stages that present 50 – 70 productions a year. Head of lighting for this busy and lively environment is Ronnie Tungland, who recently co-ordinated the specification and purchase of 20 x Robe ESPRITE moving lights to be used across the various stages.

As Kunsthøgskolen’s 1000 plus dimmer channels feeding the various stages were starting to age, explained Ronnie – who has been overseeing lighting at the academy for four years – and they were allocated budget to upgrade the lighting system. This resulted in around half being replaced and the other half being converted to hard-power channels with the remaining money spent on new, more sustainable, and greener lighting that would serve their needs for years to come.

Debating whether to get washes or spots, Ronnie decided that a multifunctional light would offer the best solution for current and immediate future needs, and after a demanding selection process, chose ESPRITES.

“I wanted a powerful and bright fixture with shutters that was relatively light in weight,” he commented referring to the abundance of stairs needing to be negotiated to get between Kunsthøgskolen’s multiple venues. At 28kg, the ESPRITE is very handleable!

Ronnie and his colleagues considered several options, made a short list and invited the different manufacturers including Robe to conduct a major shoot out at Kunsthøgskolen.

Robe’s distributor Norsk Sceneteknikk were “super professional” during this noted Ronnie, observing that they wheeled in the different demo fixtures in fully branded flightcases and set up and delivered the demo thoroughly and efficiently, answering all the queries in full.

“We were all very impressed with the ESPRITES. They met the lightweight criteria, we love the lens, they are bright, have a great selection of gobos and are quiet which is needed for many of our theatrical productions. You can adjust the fan speed and programme it into lighting cues and there are many more smart features that will benefit us now and going forward,” he stated.

He also mentioned Robe’s TE (TRANSFERABLE ENGINE) LED technology as an aspect of interest. This is an intelligent, powerful, and eco-friendly lighting solution for now and the future which enables different LED engines – high powered, high CRI, and others – to be used in the same fixtures and changed quickly and efficiently in around 5 minutes.

For alternative viewpoints, two external lighting designers were recruited to help assess the various technology on offer from the different brands during the shoot-out which took place over two days.

“We all concluded that ESPRITE was our overall best choice!” declared Ronnie.

The lights are run via a selection of Kunsthøgskolen’s grandMA2, grandMA3 and Zero 88 FLX consoles.

The fixtures arrived at the end of 2021 and have been used in the opening months of 2022 on the Main Stage and Stage 6 which both have full headroom, and the lighting designers are “very happy” says Ronnie. He designs lighting for some of the shows himself but is mainly involved in the planning and logistics related to providing their regular guest LDs with the equipment and support they need.

Ronnie was already familiar with Robe having previously worked in lighting rental companies and as a freelance production manager for concerts, festivals, and other events, so he was aware of the reliability and quality of famous Robe workhorse products like the LEDWash 600 and Pointe.

“Robe is an independent and family run company and that is very cool,” he stated, adding that, especially recently, several respected institutions in Norway have invested in Robe including Stavanger Concert Hall, which has ESPRITES that he had used for a show.

Other recent installations in Norway include at Den Nationale Scene (The National Theatre) in Bergen, which purchased FORTES and ESPRITES and Det Norske Teatret (The Norwegian Theatre) in Oslo, which has also just invested in ESPRITES. 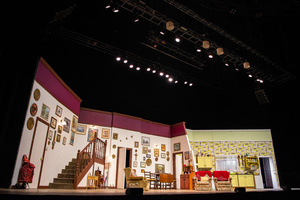 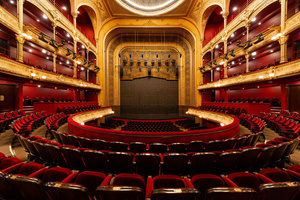