Thomas Giegerich is someone who likes to keep ahead of the game!

He and his team at bright! studios, based in Frankfurt, Germany, were already planning to add a new ‘extended reality’ division to their visual design and services business at some point during 2020, which was in anticipation of it being more widely adopted – in particular – by television productions and video projects.

The team at bright! studios were already working with real-time tracking and real-time rendering software like Unreal Engine and Notch as part of their creative workflow, as well as running a busy show and events equipment rental company from the same premises, so combining these skills into a new product was a logical step.

Furthermore, with the launch of the xR services department in mind, they had already built a small production studio and produced some demonstration reels in January 2020.

So, when the Coronavirus pandemic spread around the globe, all these plans were rapidly accelerated as they fast-forwarded their timeline from 12 months … to 12 days!

In that time, the first iteration of a fully functional streaming xR studio started receiving bookings almost immediately as live events were shutting down worldwide.

More space was cleared in the warehouse by moving some of the events kit into exterior storage and the bright! Virtual Production Studio was born.

The initial studio set up includes Robe ESPRITE LED profiles and Spiider LED wash beams for front and overhead lighting, with some LEDBeam 150s for back light.

The studio area is equipped with a 7 x 4m 2.8 mm LED backwall and a 7 x 3m LED floor with 6 mm pixel pitch. Another 12 square meters of the 6mm screen panels are flown at the front and sides of the space serving as the basic general lighting sources.

Moving lights are positioned on a ceiling grid above, poking through the gaps in the side LED panels, carefully positioned, and used to create excellent key lighting, effects, and shadowing.

The idea is to make the immersive environment perfect for camera – for the material that is still being filmed – and balanced to the simulated elements that will also be happening, so front and back illumination has to be meticulously matched for softness and reflections ensuring that any virtual shadows will match those in the real world … and vice versa.

Moving lights can also help make objects and pop out from the augmented world and background elements.

Thomas has found that the ESPRITES are ideal for creating these specific conditions that look great in both the real and augmented worlds with their LED light engine and natural looking whites.

The output from the fixtures contrasts and complements the shimmering ambience coming from the LED screens.

“We are still doing a lot of research with this project,” explained Thomas, highlighting that the studio, the lighting and the way it will work was – understandably – experimental for the first months as different clients booked it for a variety of events, streaming shows and recordings and everyone learned about the idiosyncrasies that blur the line between real and virtual worlds.

“While we were considering the concept for some time, when it then came together so quickly, some fluidity was inevitable … we all had so much to learn! Now we are settling into to some standard routines and practices and still constantly trying out new ideas.”

Thomas also reckons that Robe’s T1 wash fixtures – either the T1 PC or T1 Fresnel – would be great back lighting fixtures for the studio and for AR generally, although currently they are not using these.

The lighting console is a grandMA3 and they use a Black Magic Design URSA camera system equipped with a Stype tracking camera. All the 3D tracking data is handled by a Stage Precision system.

The bright! Virtual Production Studio has been busy since its launch and clients have included some high-end corporate brands plus several others wanting to create product presentations, conferences, seminars, and live streams.

As they are seeing increasing demand for virtual production services, the team at bright! are planning to increase the size of the studio to 240 sqm with a much larger LED setup within the next month.

Thomas sees a healthy future for virtual production and is very excited to be embroiled in this field and the prospect of what it will allow in terms of creativity.

“It will certainly dramatically alter the way set and visual designers are able to work and it will also have a cost advantage to TV and video productions wanting to bring higher production values to their broadcasts and footage,” he concludes.

For performers and choreographers, it will also open many new avenues, and bright! studios is a name we are sure to be hearing a lot more in the future!

Capturing the spirit and positive vibes of 2021 – a year full of great hopes and expectations – moving and LED lighting manufacturer Robe reveals a brand-new website, at www.robe.cz with a fresh contemporary look that is action-packed with useful information and resources for all. 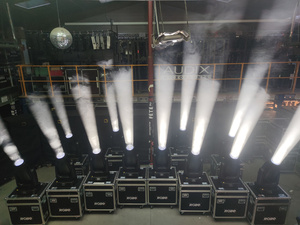