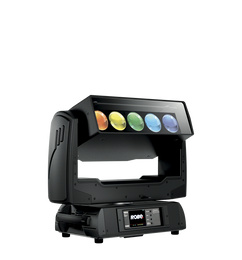 Lighting for the second Garden Beats Festival organised by Sunshine Nation and staged in the pastoral green environs of Fort Canning Park in Singapore … was designed by Craig Burridge.

He included an interesting mix of Robe products on his plot including 24 x Linees, six ColorStrobes and six LEDBlinder 148 LTs, all of which contributed to a lively and colourful scheme for the one day event for which the lighting vendor was locally based CSP Productions Pte Ltd.

Craig’s main objective was to have a flexible and adaptable rig to provide good general stage, set and audience lighting for the line-up of dance orientated artists – with a few surprises up his sleeve!

The 9 x 8 metre stage was fitted beneath a 10 x 9 metre ground-supported roof structure with 10 metres of headroom ... and this had to be squeezed in between a selection of heritage trees which grace the park, allowing the organisers to maximise the audience space.

The stage and DJ booth was clad in wood pieces and other natural materials which took the light well, and the view through the stage to the back was of one specific heritage tree that Craig knew would look awesome.

The client brief specifically requested that the lighting NOT resemble a club as they were keen to emphasis the whole Garden Beats event as a unique once-only ‘for-the-moment’ experience, rather than something that can be repeated and replicated.

The general theme and mood of the festival is bright and colourful, so Craig took that into account. He also wanted to use a full LED rig to keep the power requirements low and the carbon footprint expedient, so there were just two conventional source beam lights dedicated to the mirror ball.

Twelve of the 24 x Linees were rigged onto four 3 metre high vertical truss towers, with the other 12 on the front and mid over stage trusses. In each case they were outrigged from the trusses to maximise the effect of their continuous pan / tilt rotation. The wide slice of light emitted from the fixture or the single pixel beam looks gave Craig plenty of variation.

“The Linee gives a completely different shape which is a nice change from classic spots and beams and as we were looking for something different for this gig, they worked brilliantly,” he confirmed.

The stage was illuminated with LEDPARs from the trusses which were focussed directly downwards, leaving latitude for the Linees to work as effects.

The ColorStrobes and LEDBlinder 148s were also positioned on the front and mid trusses, where they were ideal for colouring the audience. The ColorStrobes added a punchy wash fixture to the tool box as well as their more obviously ‘standard’ functionality as a strobe.

Craig programmed and ran lighting for all the artists himself, assisted by JoAnne Yee.

He first specified and used Robe products around 10 years ago in the house installation at the St James Power Station music / nightclub venue …. And has been a big fan of the brand ever since.

“Robe has some great products,” he commented adding that he’s recently lit some shows utilising BMFL Blades which he also loves.