Elite Event Technology from Canberra – one of Australia’s leading rental and production companies – supplied lighting equipment and crew for the 2019 NAIDOC Awards which celebrated the history, culture and outstanding achievements - at community, national and international level - of Australian Aboriginal and Torres Strait Islander peoples.

This high-profile event featured a mix of live performance and awards presentations and was hosted by media personalities Sean Choolburra and Elaine Crombie at the National Convention Centre Canberra in front of a live audience of 1,200 and broadcast live on SBS’s NITV channel.

It was the first time that Elite had been a technical supplier, working for main event producers 33Creative and 38Ten who coordinated all the technical direction.

Elite’s managing director Darren Russell and his team took a very detailed brief from lighting designer Tom and technical director Peter Quinlan of 38Ten and constructed the lighting rig to their specifications.

Tom explained that they were looking to create a lot of warmth onstage with a big emphasis on theatrical side light. Stage depth was limited as video was squeezed into the space. Being able to shape the light was important and they also wanted a big look, so putting lights in all the gaps between the onstage LED screens at different heights both filled the void spaces and offered powerful looks.

One of the big challenges was ensuring that lighting worked for both live and broadcast contexts and treating the ‘camera as King’ meant balancing screens and front light to a constant colour temperature. Once that was achieved, other colours were chosen from a monitor screen.

“Several of the live the acts were quite low key, with lighting to match, so ensuring the appropriate light levels for both live audience and broadcast was important,” he commented.

The curved front stage had a small thrust emanating from the middle, and above this were two semi-circular rings of trussing created with straight pieces rigged in a curved shape, with another gentler V-shaped truss further upstage. Most of the BMFL Spots, BMFL WashBeams supported by the MMX Spots were positioned on these for good coverage of the stage.

The ones on the outer ring could also swing around and highlight the audience.

BMFL Wash Beams were chosen as an ideal fixture to balance the lighting levels for camera against the five columns of LED screen which were prominent onstage.

Tom comments that they were ideal for the role: “Shaping the beam was key to removing spill onto the screens and parts of the stage. It allowed performers to stand proud of the video screen and gave plenty of depth with lots of intensity to play with. Colour balancing the fixtures for cameras was also great … with lots of range.”

Tom operated lighting for the show using a grandMA2.

Elite’s CEO Darren Russell was delighted to be involved with the event for the first time and comments that it was a “great-looking show.”

Tom mentions that working with the Elite team as “A joy! This gig was quite complex for the space, and all challenges were met with a smile and a determination to deliver what was needed quickly and efficiently.”

Elite Event Technology has invested steadily in Robe moving lights over the last ten years and now has several hundred in rental stock. The most recent purchases have been more BMFL WashBeams and LEDWash 300+s. 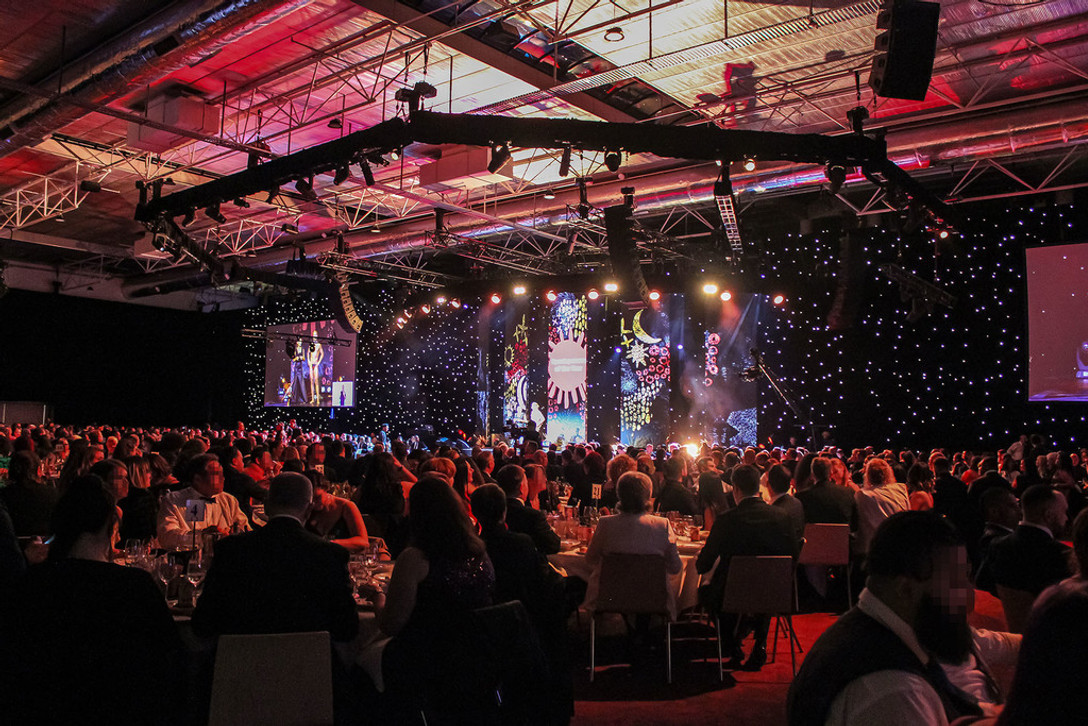