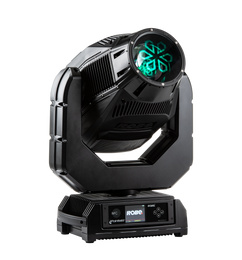 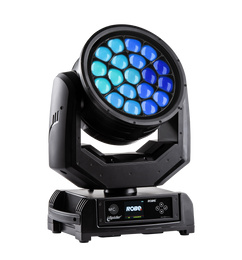 The fourth GlasGLOW event opened hearts and minds as people engaged with the fun and imaginative light art presented by this stunning Itison illuminated trail concept in Glasgow Botanical Gardens in the city’s West End. Two kilometres of lighting, set pieces and narrative magic energised the dark winter evenings, and lighting designer Grant Anderson chose Robe iPointes and iSpiiders to help ramp up the drama for central installation and finale.

Grant had used iPointes for 2020’s GlasGLOW3 event, and was delighted with the results, so he spec’d the fixtures again this year to create impressive searchlight beam effects blasting through the air around the finale lighting composition, a large area involving the main lawns transformed into an ocean of pixel dots which was traversed by guests via a central walkway.

The iSpiiders were used in this same area, horizontally beaming across the lawns as they came alive with animated, colour changing, chasing pixels.

It was the third year that Grant has lit the two-and-a-half-week event for which he worked closely with set designer Kenneth Macleod and composer Kevin Murray who both created unique scenic and audio pieces for the various zones making up the trail.

This year’s GlasGLOW messaging was aligned with COP26 – the 2021 United Nations Climate Change Conference – taking place the week after it opened, drawing attention to the need to save and preserve our precious planet now!

GlasGLOW’s narrative thread was based around defeating the powerful and dangerous pollutant ‘Gloop’ which was threatening to take over the city, however guests didn’t have to follow this literally to enjoy the adventure of this multi-layered, large scale and at times truly immersive visual and sonic installation.

Also different from the 2020 installation were the Covid restrictions. A year ago, capacity was very limited, and people had to keep moving. This year, with the recent easing of rules, the numbers were increased, social distancing wasn’t necessary, and bars and food outlets could operate with people allowed to stop, linger and socialise for periods as they wished.

Another 12 iPointes were positioned around the lawns for the finale. Four were on risers in front of Kibble Palace, the famous 2000 square metre iron-framed 19th-century plant house that dominates that end of the Gardens. These fixtures shot beams lengthways down the lawns and looked spectacular.

They were intersected horizontally by two more banks of four iPointes, one sitting on risers under a clump of trees, matched on the other side by four on the roof of one of the other plant houses, with the actual sources hidden but the beams clearly visible.

They were primarily used in white with some colour bumps cutting into the night skies. “They were the brightest lightsource available that didn’t need to be covered in domes,” commented Grant, adding that he also knew from last years’ experience that iPointes were reliable, a major consideration with the Scottish winter!

The iSpiiders he was trying for the first time! “It’s always exciting to use new technology, and this was a perfect application,” stated Grant, adding that he was “delighted” with the results. Eighteen iSpiider units were spread out equidistantly along the lawns, left and right of the central runway decking, with the other two rigged on trussing in the prologue area and running in wide mode to display patterns on their LED rings.

Grant utilised over 2000 different lighting fixtures – more if you count the pixel dots – on the entire project which was spread out across the Botanical Gardens, all controlled via two grandMA2 consoles programmed by Lawrence Stromski in a very well organised FOH cabin. Two areas of the trail were running a timecoded show and the rest of the lighting effects and scenes were MIDI triggered via the soundtrack.

All the lighting equipment was supplied by Encore, project managed for them by Adrian Searle and Stephen Reid. Grant comments that their service and attention to detail was “excellent as always”. They co-ordinated closely with the event’s technical manager Dan Quale, and production manager Paul Claydon.

Another great hit with the public, there was also a big emphasis on making GlasGLOW4 as carbon conscious as possible – much of the lighting was LED or low powered, the generators ran on biofuel and where possible the set and scenic pieces were constructed and the site set up was created using recycled or recyclable materials.

The initial get-in at the Botanical Gardens began two weeks prior to the event opening and involved establishing all the infrastructure including power, cabling, services, office and work cabins, etc., and the technical production kit arrived a week later. This was installed over three days, followed by some frenetic programming sessions ahead of the first client walk-throughs, then notes and tweaks, with everything ready to roll for the opening night the middle of the following week!

The schedule – especially allowing for idiosyncrasies of the weather – was tight, but with such a great team onboard “the camaraderie was great, and we have all enjoyed working together again, bouncing ideas around and getting imaginative … it’s been a very creative and rewarding process,” concluded Grant.